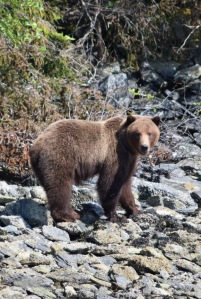 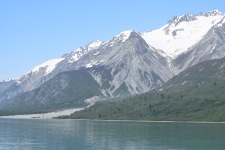 The media project we have in mind is located on Chigacoff Island in southeast Alaska. We ourselves live onboard our sailing boat Sänna which my wife Marie and I have sailed from the UK as part of our round-the-world circumnavigation that has now taken us into the colder waters of the Gulf of Alaska. We have since based ourselves in the small and remote First Nation settlement of Hoonah on the northern shorelines of Chigacoff Island, where Sänna is currently moored.

Wild Chigacoff Island has the highest concentration of brown grizzly bears on earth… a population of almost three per square mile. We ourselves encounter bears frequently but, being British, we have little concept of carrying weapons for either self protection or for hunting, preferring to rely on a small taser in the hope of keeping out of harms way. However, we are no strangers to risk having the two of us crossed many of the world’s oceans to arrive in our current cold location. Whilst in Alaska we have come face to face with the ubiquitous American obsession… guns, rifles and assault weapons of all types and sizes. It’s fair to say that we have also encountered the controversial all-American attitude that goes with it.

On Chigacoff we have befriended many of the locals… fishermen, government enforcement officials and those who make a living entirely derived from their hard way of life. We have also come to know the bear hunters who make a living from shooting and killing trophy grizzlie bears by selling their hunting and guiding expertise to fellow Americans and other nationalities who have an inherent interest in weapons and wildlife killing.

It is our intention to record and film from our current location in Hoonah, in that we intend to interrogate this story from both sides. Firstly, by filming the day to day activities of known brown bear families plus individual bears at set locations. We will develop their personalities into a strong storyline format using high level filming, narrative and emotional attachment techniques. We will then introduce the mirror aspect from the bear hunter’s viewpoint, providing a background scenario of their way of life, their own personalities and their opinions regarding their rights to carry weapons when set against our own ‘irrational’ concept of guns from a British standpoint. This recording will be a reflection upon two opposing ways of life, differing viewpoints that will undoubtedly be controversial. The arguments offered and the visual records of the killing of wild grizzly bears will be alien to most viewers except for the large majority of Americans.

We ourselves have the location experience and local knowledge. We are also English and so have the differing and opposing opinions that most likely reflect the views of the majority of the rest of the world. We are seasoned adventurers in our own right and have the credibility to be where we are… with myself being a freelance writer published in a number of high profile magazines with a following that is building. Filming and film production is a new area of expertise for us and we would like to team up with the right people from a production studio standpoint who can assist in making this project a success on a joint venture basis.

You can view our Sailing Vessel Sänna website detailing our round-the-world circumnavigation at www.sanna-uk.com.

You can view the website of David Ungless Freelance at www.davidungless.com.

You can view the website of Ungless Media here.