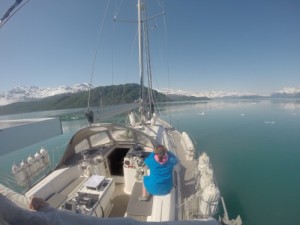 Marie finally confessed she’d hidden chocolate Toblerone on the boat to eat when alone on watch during the night. I was devastated. When I found out, having at last made landfall in Prince Rupert, she giggled finding the whole thing amusing.

I myself confess to an inherent chocolate addiction and usually stock Sänna with copious amounts for long passages, but on this occasion I’d decided to try and abstain. It was either that or another trip back to the hypnotist. Marie doesn’t usually eat chocolate and I can’t get my head around why she suddenly decided to become a secret-eater during our twenty two days at sea. We finally made port much further north than we’d originally planned, departing Hanalei Bay on the wonderful island of Kauai in Hawaii for Victoria, on the southern side of Vancouver Island in British Columbia. But we didn’t plan for the vicious storm that crossed our path six hundred miles out from the Canadian coast.